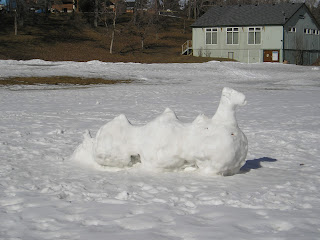 The rinks are gone so the Snowgopogo appeared. This Season 2012-2013 and 2011–2012 This season off to a quick start , because it snowed with leaves still on the trees and hill. Opening day Nov 25, 2012 last year Nov 27th 2011 Closing day March 10,2013 last year March 2nd 2012 Closed Lower Rink by not cleaning it on March 4th Saw skaters on upper March 10th . Coats of Ice Last year 69 upper this year 79 Last Year 61 lower this year 73 New Snow Blower Kurt Goalie Slush Fund from Bottle Returns (Thanks to all that gave & Bud for taking ) Change of Flood night from Sunday to Monday (Thanks Biagio ) Changes to Blog’s side bar (Thanks Jamie ) New Sponsor Village Brewery (Thanks to Kurt ) Team , Kurt, Bud, Biagio, Keith, Kris, Grant, Jamie, Andrew, Brad, JR, Ian, Peter, Glenn, Austin, Jeff, Dale, Giuseppi, Dennis, Clark, Grant, Andy, Andre and Claire. Thanks Spolumbo’s for sausages ,Nick’s for pizza, Village Brewery for some beer and Harmony Homes (Kurt ) for all the new goalie and bringing on Village beer. Our MAYBE wish list for next year is; Snow fence to keep leaves from hill off upper rink. Wire fencing at ends of upper rinks to stop pucks Shinny Wrap-up Again, it was an incredibly successful and fun year. During the course of the community program, approximately 20 children participated. The outdoor format involves half hour of skills development, a hot chocolate break - followed by half an hour of “shinny” hockey. Often, the shinny portion of the evening lasts far longer than half an hour as the children avoid direct eye contact with their parents in the hopes of prolonging their outdoor fun. It is very rewarding to see the kids take advantage of the best outdoor ice in Calgary – compliments of the Rosemont Ice Guys. April 9th marked the conclusion of the 2012/2013 Rosemont Shinny season. We closed out the season at the NE Sportsplex where the kids and their parents took part in an indoor shinny hockey game. Following the game, the kids enjoyed a series of healthy food items such as pizza, potato chips and pop. Jean Blackstock single-handedly organizes and manages this valued and unbelievably affordable program. During the après shinny snacks, certificates and personally engraved medals were handed out to all of the children. Each child who participated in the program asked if the program would be offered again next season since they enjoyed the experience so much. Thanks also goes out to the coaches of the shinny program: Todd Layton and Grant Parks.
Posted by Bud at 2:12 PM

This article is very meaningful .. thanks