Craig emailed me first thing this morning after he studied the weather pattern for this week. He suggested that tonight might be the best and/or only night to get a flood in. He was Right!

After the emergency call-out to the squad of iceguys this morning, I was able to juggle your busy schedules. Some at 7 pm and others at 8 and 9 PM.

Biagio, Craig, Kris and I scraped off the ice at 7 pm. We met DAVE, skater from Huntington Hills, who came down to get a workout on the ice. He helped us after he skated on the lower ice. Meanwhile we were flooding the upper. Thanks Dave.

Craig recruited Conrad, one of the shinny dads on Tuesday night to help out if he could. Conrad, showed up before 8 pm with his cousin to give us a hand. So the 6 of us laid down a coat and talked over a pop while waiting for the H2O to solidify. Then put down the second coat. 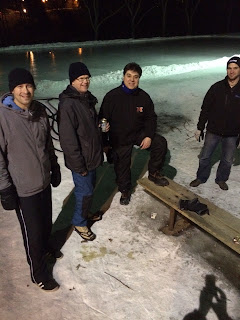 Jeff, like clockwork showed up before 9 pm, while just Craig and I at this point. Craig handed the "torch" to Jeff and I putting down a third layer on each.

As if the night couldn't be orchestrated well enough... Ian shows up to put the finishing touch on the last coat. Yes, that is right, 4 coats on each tonight!

Well done everyone. With temperatures barely freezing over night, for the next 7 days, it was great to get this done while we could.

Don't forget the Party Friday night. Bring the kids! Have a skate and a cheers to yourself for the work done!

Hi there! I've read many posts about military diet, and I can tell that yours is very valuable. The 3 day diet reviews show that many people admit that its length is what determined them to try it. Most of us are fascinated by the idea of being able to lose weight fast, and then returning to our normal lifestyle. See more http://3daysmilitarydiet.com/results-reviews/3-day-military-diet-reviews.html