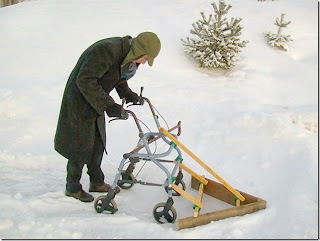 It was a long season, with opening Day on Nov. 27th tied with 2008 for the earliest, last season we opened on Dec. 12th,2009, this year's closing date was March 13th last season we closed on March 5th,2010 so we had approx. 24 more days.We started flooding at 8 pm this season and added 66 coats to the upper rink and 54 to the lower, plus the lower rink was larger than most years.Bertha our snow blower had a rough year and may need a new motor.This years crew was; Andrew,Biagio,2 Brads, Bud,Dennis,Glenn,Grant,Ian,Jamie,Jeff,JR,Keith,Kris,Kurt and Neil.Thanks to Spolumbo's for sausages, Nick's for lots of Pizzas and Bud's friend Doug for Calgary Beer.Thanks to Kris' wife Lisa for letting us know about the Calgary Herald's Contest,we won their CALGARY'S BEST OUTDOOR SKATING RINK contest.Prize where two tickets to the Heritage Classic , Bud and Kurt went, thanks to Keith for giving his ticket to Kurt.We also got lots of other press with Kurt, Kris and Kurt's daughter Paulina appearing in different newspaper stories.This season's Shinny Hockey program was the best ever according to Coach Grant Parks . With help from Jean and Hillary Blackstock and Assistant Coach Todd, 24 kids enjoyed the Tuesday night program.
Thanks to all involved in the success of this season.
Posted by Bud at 8:49 PM